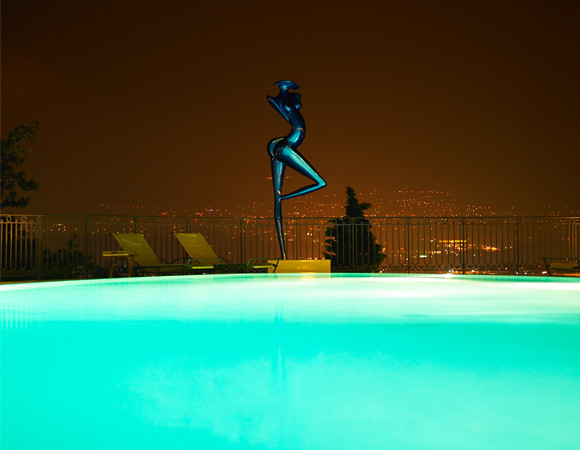 Hidden in the hills of the Cote D’Azur lies the enchanting village of Mougins. With stunning views over the French Riviera, the village is bursting at the seams with all the finer things in life. Once home to Picasso, it is not surprising that it has such a vibrant arts scene – not to mention its gastronomic credentials, making this village the jewel in Grasse’s crown with small flats costing around the million pound mark.

As you wander around Mougins’ cobbled streets, you are seduced by the hypnotic smells of delicious French food wafting across the village from quaint al fresco cafes filled with intriguing international women in dark glasses and killer heels sipping Champagne while feeding haute-cuisine to their pocket-size pooches.

What’s more, this chic village is just 10 minutes from buzzy Nice and Cannes and an hour and a half from the slopes of the Alps, making it the perfect base from which to explore the Riviera. You could spend the morning skiing in the mountains, the afternoon sunbathing on a beach and the evening in a Michelin-starred restaurant overlooking it all.

It would be a travesty to visit Mougins and not dine in the Restaurant Candille. Celebrity chef Serge Gouloumes has five years worth of Michelin stars hanging from his apron strings. The sophisticated French dishes are painstakingly crafted and reach the tables looking like works of art. His signature dish; the tatin of foie gras and Armagnac was unlike any foie gras I have ever tasted; fantastic texture and the apple gave it an extra dimension foie gras can often lack. For such a critically acclaimed restaurant, it has a wonderfully welcoming feeling with Serge himself meeting and greeting guests to ensure the food is received well each day.

Just minutes from the village is the luxurious hotel, Le Mas Candille. The elegant 18th century farmhouse not only boasts the Michelin-starred Restaurant Candille but is also home to Europe’s only Shiseido Spa. Located in a Japanese garden behind the hotel, the award-winning spa has five treatment rooms as well as an outdoor Jacuzzi, hydrotherapy pool and sauna.

Stroll along Cannes’ Boulevard de la Croisette amidst the film stars and billionaires hopping off their super-yauchts for a cigar and glass of bubbly. From Cannes, catch a boat to St. Honorat (E12). Inhabited by monks for 15 centuries, this peaceful island offers a relaxing retreat with stunning views of the mainland backed by the snow-capped Alps. Head to Cafe Des Musée to watch the world go by with a rich coffee and homemade glittery macaroons.

The terracotta town of Grasse, France’s prestigious perfume town is also not to be missed. It’s home to the world-famous Fragronard Museum where you can complete a perfume-making workshop.

The village is popular with affluent French second-home owners. during my visit, the majority of the hotel guests were wealthy French couples although the Italians and the Brits are now catching on and booking up for 2011.

What could be more relaxing than returning from an afternoon exploring the Riviera to recline on your private balcony with a glass of chilled champagne while watching the sea mist roll in across the French countryside as the sun sets to reveal the twinkling lights of Cannes?

It is hard to find fault. The Hotel Le Mas Candille offers contemporary amenities in a timeless setting. My only complaint would be that on my out of season visit in November some of the leisure facilities were not accessible, such as the hydrotherapy pool. The main pool is open from May to September but this is a little frustrating with the region still beautifully warm in November.

Most airlines fly to Nice and Cannes from around £50 return. Check individual airlines for details.

Stay at the five-star Le Mas Candille hotel in Mougins; just 10 minutes from Nice and Cannes. Rooms from approximately £200 per night, including breakfast:www.lemascandille.com