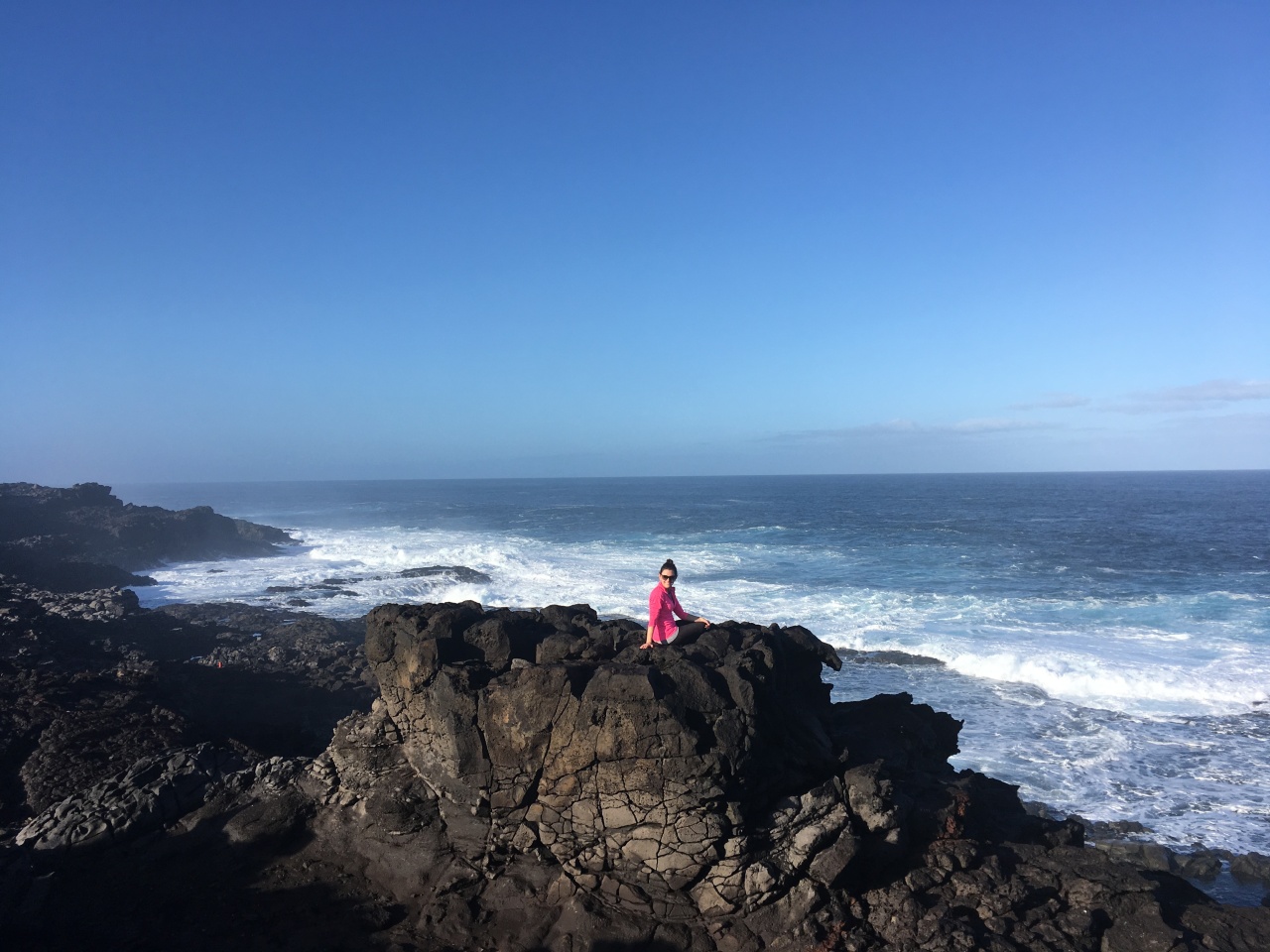 For many, it’s the preserve of package holidays and theme parks, but in a two-part travel special this Easter weekend, Jess Baldwin embraces the Arb’s principles of going off the beaten path and discovers a side to Lanzarote rarely seen…

I spotted it in the most unusual of habitats; a volcano indeed. No, you don’t often find these creatures in volcanoes. You tend to spot them in tamer, less epic surrounds. I could tell she was weary from her slow, heavy movements and sweat-tussled mane. We acknowledged each other politely with a knowing glance. I am of course talking about a fellow Canarian water mule. Loyally following the family herd, step after step, with litres of water, sun cream, snacks, Calpol, nappies… – you name it, we’ve got it. As rock stars say, we didn’t choose this life, it chose us.

With the arrival of our daughter Rosie, life had changed somewhat. The sports car had been replaced by a people carrier, our stylish lounge had been engulfed in a torrent of colourful plastic and now our adventurous holidays were following suit. Yes, we had finally committed ourselves to a 2.4 family holiday. You know the ones; sun, sand, sea, and all that jazz. And, after much deliberation, we had finally agreed to swap malaria-infested mangroves and far flung affairs for ‘safe’, short-haul sun in…Lanzarote. So why was I teetering on the side of a volcano, without a kid’s club (or parachute) in sight?
I first visited the ‘land of fire’ on one of its popular package tours as a clueless teenager, back when Spice Girls ruled the world and proof of a successful holiday was aggressive strap marks. Unsurprisingly, I don’t recall an awful lot about the island’s rich art scene, its volcanic history or its unique landscape. In fact, I recall everything was rather…monotone, all black rocks and white buildings – oh, and I rode a camel. 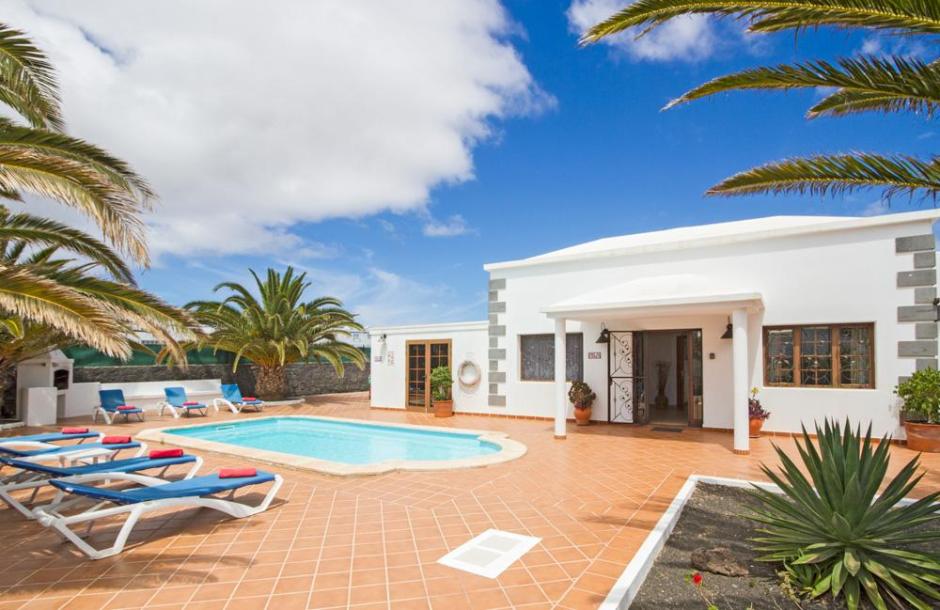 Fast forward two decades and here I am, with my own little family, off to the black and white land of year-round sun. It all started as planned, destined for the popular seaside resort of Playa Blanca (note the ironically monotone name). Our base was Casa Palmera; a four-bedroom property from the Oliver’s Travels portfolio. Set a few streets back from the ocean the family villa had a heated private pool, a hot tub and a barbecue. Just ten minutes’ walk from a sandy beach, it was the perfect base for our family holiday.
However, for those with an adventurous spirit lurking within, it’s hard to ignore the fact that Casa Palmera it is also ten minutes’ walk from the base of a volcano; Montaña Roja. Otherwise known as Red Mountain, it glows a seductive burnt orange when the sun strikes. A little too seductive, even. ‘We should stroll up there one morning,’ said my partner, Sam.

And there it all began. Before I knew it, I was trailing Sam, with Rosie on his back, carting litres of water up my first volcano – an eye-opening expedition which revealed a very different Lanzarote. To our left, the gleaming resort of Playa Blanca, with its uniform whitewashed complexes and lavish hotels lining its sandy bays. To our right however, the sun pirouetted across the vast desert creating a kaleidoscope of creamy yellows and fiery reds and everything in between. In the distance the azure Atlantic released its fury on the impervious cliffs and the sun illuminated hidden coves, longing to be explored. 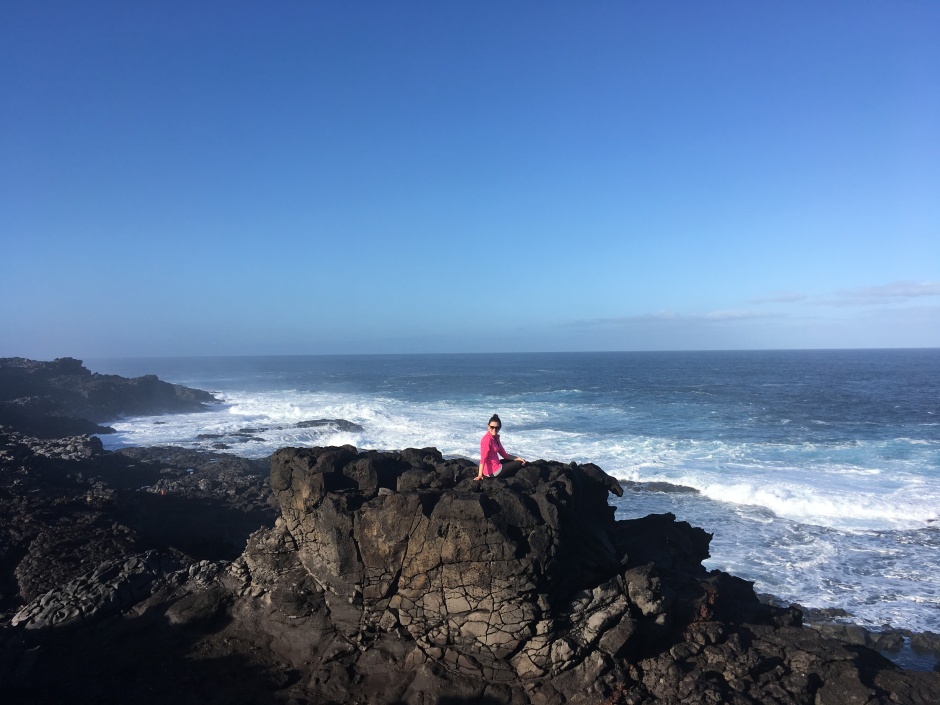 The next morning at sunrise, we set off for Faro de Pechiguera (the local lighthouse), eager to witness the Atlantic’s rage close up. Our target was a desolate hotel, abandoned 30 years ago. On one side was arid desert, interrupted only by the odd cactus. On the other the ocean was frothing at the bit, battering the volcanic shore so hard the spray swept across our skin with each beat. The dark honeycomb textured outcrops created crystal clear rock pools, overflowing with waterfalls with every wave, with the salty water constantly surrendering to the ocean once again for repeat attack. Eventually we found a secluded overhang and quenched our thirst whilst watching the waves erupt before us.
Heading back to Playa Blanca’s relaxed promenade, alive with the hum of Latino music and a steady stream of holidaymakers (who also varied from creamy yellows to fiery reds and everything in between) we collapsed at a seafront café, indulging in a satisfyingly sweet coffee – well, us mules can’t survive on water alone. That evening, our cheeks burning hot and pink from the incessant wind of our clifftop foray, we hovered over a map of the island, eagerly planning our next adventure. It was becoming addictive, this intrepid stuff.

Over the coming days our hikes saw us dwarfed in dramatic lava fields, echoing our calls around void volcanic craters, witnessing boundless waves ricochet along the unwavering coast from secret black sandy bays and watching the island’s hypnotic peaks gradually burn out with the evening sun. Oh, and relaxing on the odd sandy beach of course – well, it was meant to be a ‘family holiday’ after all. 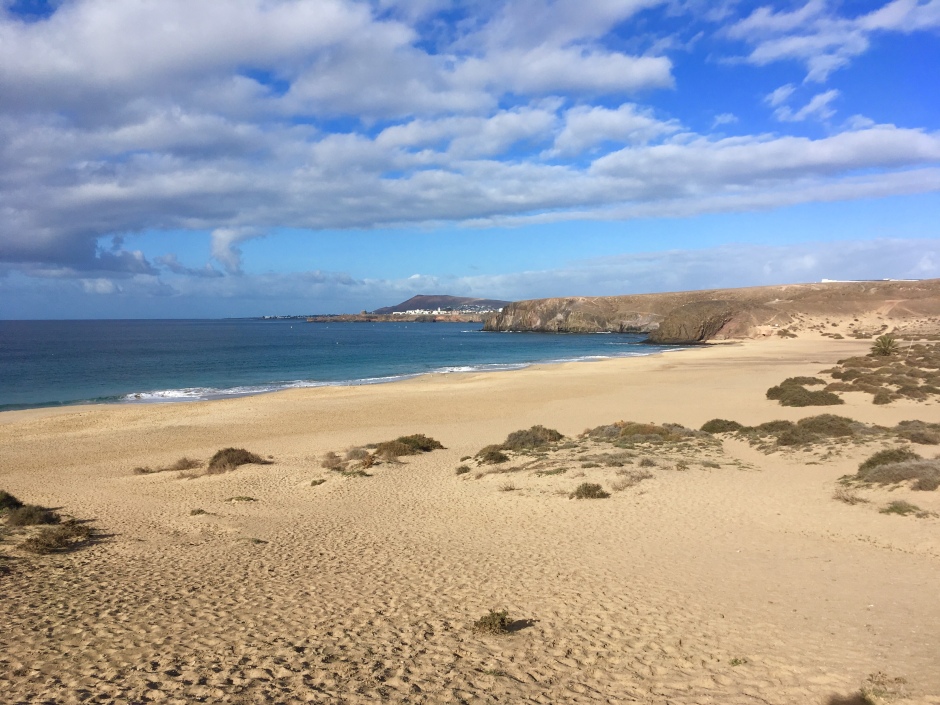 One morning, we headed out to the picturesque village of El Golfo, famed for its volcanic sands and luminous emerald lagoon. Our route headed inland, through volcanic plains plentifully dotted with minty green plants – these small fertile islets of shrubbery are a sign that the land escaped the most recent volcanic eruptions. Just as we became familiar with our new terrain we entered Timanfaya National Park. The dramatic seas of pumice like lava seemed to roll on and on, horizon-bound.

On first glance these Jurassic like scenes seem blacker than black, but as our eyes acclimatised they gradually revealed their true colours; boulders of deep oxblood and rich chocolatey brown stood petrified beside petrol purple daggers. A snaking path faded its way from bold black granite stones to a fine red dust, leading us to an empty beach with a difference. Quilted in powdery ashen sand the inky black bay was taking 12 rounds from the Atlantic when we arrived.

Lanzarote’s rawest spots make you feel utterly insignificant, totally at the mercy of force majeure. So many of our cities have lost their skies, incessantly punctuated by tower blocks, skyscrapers and spires. Standing with nothing between you and the horizon, other than a constant ebb of raging 15-ft waves, you no longer feel like a player in the game, but a mere witness. 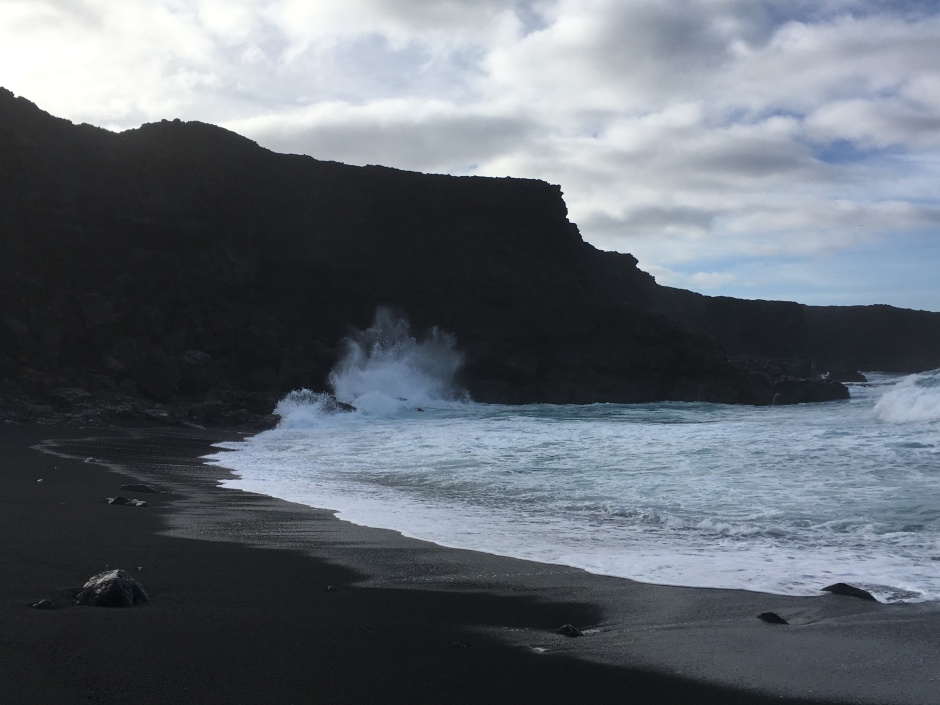 Having become a little uneasy at the sheer force of the display before us we hotfooted it back along the cliffs, which despite being around 50ft high, still delivered us the odd crest. It was a surreal moment sauntering back in to sleepy El Golfo and seeing children playing in the park and locals casually sipping coffee, seemingly oblivious to the epic scenes which were unravelling around the corner.
This mule had earned a refuel, so we grabbed a table at one of the village’s seafront restaurants and dined silently, recalling the scenes we had just witnessed. As we indulged in the freshly caught fish and a tangy octopus salad we watched a lone fisherman navigate the rock pools. 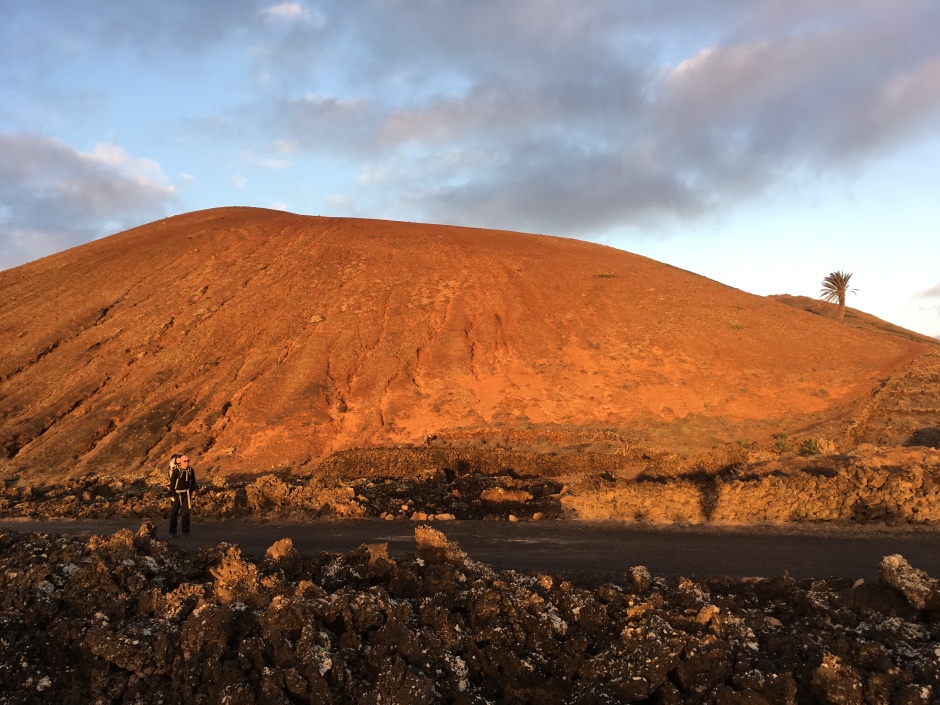 Our week at Casa Palmera had been a revelation; we had discovered another Lanzarote entirely. Our expectations of busy beaches and endless souvenir shops had been extinguished the moment we scaled Red Mountain. This time I hadn’t felt like just another tourist. Perched at the top of a volcano I felt like the only person on this mysterious island. I guess some things aren’t always as black and white as they seem.

Casa Palmera has four bedrooms & three bathrooms and is bookable through luxury villa holidays specialist, Oliver’s Travels. Rates start from £1,190 per week, based on two guests. For more information, including details on prices and availability, visit http://www.oliverstravels.com or phone 0800 133 7999.